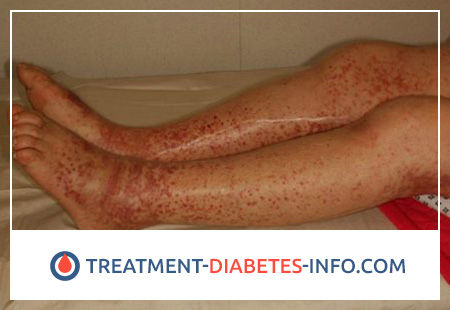 Thrombocytopenic purpura is a disease that develops against the background of an increased tendency of platelets to aggregate (“gluing”), manifested by the widespread formation of microthrombus, leading to blockage of the lumen of small-caliber arteries; it is also manifested by the secondary melting of blood cells, thrombocytopenia consumption (a decrease in the number of platelets per unit volume of blood as a result of their active use in the process of thrombosis). In addition, thrombocytopenic purpura is accompanied by ischemic damage to the brain, heart, kidneys, liver and many other organs and systems. Thrombocytopenic purpura is the most frequent and vivid illustration of hemorrhagic diathesis. It occurs in newborns, children of any age and adults, and in women 3 times more often than in men.

The causes of thrombocytopenic purpura are currently unknown. The hypotheses about the viral, immune, and fermentopathic nature of the disease have not yet been confirmed. Hereditary forms of the disease are relatively rare, while the acquired forms predominate.

When idiopathic thrombocytopenia, when it is not possible to identify the causative factor, hyperproduction of megakaryocytes and platelets is noted in the bone marrow. In immune forms of thrombocytopenia, platelet plate destruction occurs under the influence of antibodies, with hereditary shortening of platelet life due to impaired activity of glycolysis enzymes, a defect in the structure of their membrane, and a decrease in thrombopoietin levels. A radioactive indication method reveals a sharp shortening of platelet life to 8-24 hours instead of 7-10 days, in some cases, their disappearance.

Thrombocytopenic purpura is an acutely occurring, rapidly progressive disease affecting people of different ages. Among patients with predominant persons aged 10 to 50 years, in women, the disease occurs more often. The disease begins suddenly in full health or shortly after acute respiratory or intestinal diseases. Patients have fatigue, weakness, headache, loss of appetite, nausea, in some cases there may be vomiting, pain in the abdomen and chest, the wrong type of fever, visual impairment, the appearance of small hemorrhages and bruises on the skin. Soon, these phenomena are replaced by the expanded picture of illness with fever, hemorrhagic syndrome (bleeding, bruising, nose and gastrointestinal hemorrhage, retinal hemorrhages, bleeding gums, at least – hemoptysis), volatile and complex neurological symptoms (disorientation, ataxia, lethargy speech, one-sided paralysis, trembling, blurred and blurred vision, convulsions, lethargy, deep pathological sleep, sometimes acute mental disorders, in severe cases – a coma). The main clinical symptoms are skin hemorrhages and bleeding from the mucous membranes (especially in children), arising both spontaneously and under the influence of minor, inconspicuous injuries, injections.

Skin hemorrhages are located more often on the front surface of the trunk and extremities, they have different size – from small to large spots and bruises. Unlike skin hemorrhages of vascular origin, a tendency to merge may appear. This clinical feature is a diagnostic aid for the physician in properly assessing the nature of hemorrhagic diathesis (in combination with laboratory hemorrhagic tests). Depending on the prescription, hemorrhage on the skin may acquire different colors (blue-greenish, brown, yellow).

As for bleeding from the mucous membranes, the frequency is dominated by nasal and uterine, rarely gastrointestinal, pulmonary, renal, bleeding gums. Nosebleeds sometimes become profuse and lead to severe anemia. In women, menstrual bleeding comes to the fore. There may be hemorrhages in the ovaries that mimic an ectopic pregnancy. In some cases, thrombocytopenic purpura is detected in girls with the appearance of the first menstruation. Such a diagnostic detail in case of idiopathic thrombocytopenic purpura, such as the absence of isolated bleeding from mucous membranes and skin hemorrhages, is important. More often, similar phenomena accompany such pathological processes as cancer, hypernephroma, fibromyoma, hypertension, atherosclerosis, nephritis, menopausal syndrome.

With significant blood loss, a pattern of post-hemorrhagic hypochromic anemia is observed. Usually, the number of erythrocytes, leukocytes, hemoglobin content is without significant deviations from the norms. Sometimes there is moderate leukocytosis with the advent of young forms.

Marrow hematopoiesis is characterized primarily by an increase in the total number of megakaryocytes. Often, large megakaryocytes are found, often young forms that have a round core. The detachment of platelets from megakaryocytes may be impaired. In cases where accumulation of platelets is not detected around megakaryocytes, their rapid entry into the blood can be assumed. With the development of anemia, a picture of enhanced red blood cell formation is noted.

The retraction of the blood clot is sharply disturbed, the serum of the patients is completely incapable of separating, the clot remains loose for 2, 8, 12 or even more hours. In periods of improvement, retraction is normal. Often there is complete parallelism between thrombocytopenia and blood clot retraction. The duration of bleeding is sharply increased in the period of exacerbations, which is associated with thrombocytopenia and the disorder of retractability of small vessels. The clotting time is normally normal or somewhat lengthened. Endothelial signs in the period of bleeding are positive, with improvement – negative. Thrombocytopenia can be of varying severity (most often platelet count is from 20 to 70 × 109 / l), acute non-immune hemolytic anemia is observed with a decrease in hemoglobin level of 40–80 g / l, reticulocytosis, an increase in indirect bilirubin and free hemoglobin in plasma ( serum), often kidney damage (protein, red blood cells and cylinders in the urine, initial oliguria with hemoglobinuria or without it). In addition to these main symptoms, quite often various abdominal signs appear – abdominal pain, sometimes with a picture of “acute abdomen”, melena (blood in the stool), enlarged liver and spleen. Adrenal insufficiency is possible – hypotension, ischemia of other organs.

The disease is usually with frequent exacerbations, with alternating improvements of varying duration. In chronic course, thrombocytopenia and bleeding are constantly observed. The erased form is due to an insignificant decrease in the number of platelets, prolonged menstruation and isolated bruises on the skin. Hemorrhagic crises that are accompanied by anemia or extremely extensive hemorrhages can be fatal if located in the brain. The prognosis depends on the form of the disease (acute and chronic, immune and non-immune). Disability of patients is reduced.

Sometimes purpura appears for the first time during pregnancy. The course of pregnancy and childbirth in women who suffer from thrombocytopenic purpura, with the exception of acute cases is usually favorable, the symptoms often decrease and may even disappear; blood loss during childbirth without exacerbation of the disease does not exceed normal. On the contrary, abortion is fraught with profuse bleeding. Therefore, in the absence of pronounced bleeding during pregnancy, thrombocytopenic purpura is not a contraindication to colony and childbirth. Contraindications to pregnancy are frequent and massive bleeding.

Therapeutic measures for thrombocytopenic purpura are prescribed depending on the clinical course. Corticosteroid hormones, spleen removal and immunosuppressants are used. The average daily dose of prednisone at first is 1 mg / kg body weight per day. In severe cases, this dose may be insufficient, then after 5-7 days it is increased by 2 times. Initially, hemorrhagic syndrome is stopped within a week, and then the number of platelets increases. The treatment continues until the full effect. Reduce prednisone gradually under the “cover” of delagila. In the event that there is an exacerbation after the withdrawal of prednisone or a reduction in its dose, you should return to the original high doses of the drug.

In the absence of a complete or sustained effect from hormone therapy for 4 months, there are indications for removal of the spleen, which in 80% of patients with autoimmune thrombocytopenia leads to practical recovery. Removal of the spleen is carried out during therapy with hormonal drugs, on the eve of the operation, the dose is increased. However, surgery for autoimmune forms in individual patients may not lead to full recovery. Bleeding may disappear, and thrombocytopenia remains. In some cases, there is an increase in the number of platelets after 5-6 months after surgery, or there is a therapeutic effect of previously ineffective corticosteroids.

In the case of an ineffective removal of the spleen, immunosuppressants are shown, which are advisable to prescribe against the background of glucocorticoids (hormones). Apply azathioprine at 2-3 mg / kg for 2.5 months, cyclophosphamide at 200-400 mg per day (for a course of 6-8 g), vincristine at 1-2 mg / m2 once a week (course duration – 1.5–2 months). It is highly undesirable to prescribe immunosuppressants to children, since they have a mutagenic effect. To use immunosuppressants to remove the spleen in autoimmune thrombocytopenia is irrational. Blood transfusions, platelet suspensions are not shown due to the development of thrombocytolysis (melting of platelets). With a pronounced anemia, only washed red blood cells can be transfused. Symptomatic treatment of hemorrhagic syndrome includes local and general hemostatic agents (hemostatic sponge, estrogens, adroxone, ditsinon). It is necessary to exclude all medications that violate platelet aggregation (aspirin, butadione, Brufen, carbenicillin, barbiturates, caffeine, chimes). Avoid tight tamponade and curettage of the uterus when bleeding.

In pregnant women with thrombocytopenia, the use of hormone therapy is not safe for the fetus because of the possibility of developing hypotrophy (thinning and diminishing function) of the adrenal cortex. Breastfeeding is preferably replaced by artificial, since the mother’s milk may contain antibodies. Removal of the spleen during pregnancy is carried out only for health reasons.

The prognosis is different. With the immunological reaction of the megakaryocytic germ, as well as with the ineffectiveness of spleen removal, the prognosis worsens. Patients with thrombocytopenic purpura are under dispensary observation. At the stage of improvement, hematological monitoring is carried out once every 23 months with the examination of the most important hemorrhagic tests. The appearance of even mild bleeding becomes an indication for the use of hemostatic agents, glucocorticoid hormones, following a diet with the exception of spicy dishes, vinegar, canned vegetables, and alcohol. It should also be prescribed for a long time, rosehip infusions, nettle sesame oil, peanuts nuts.